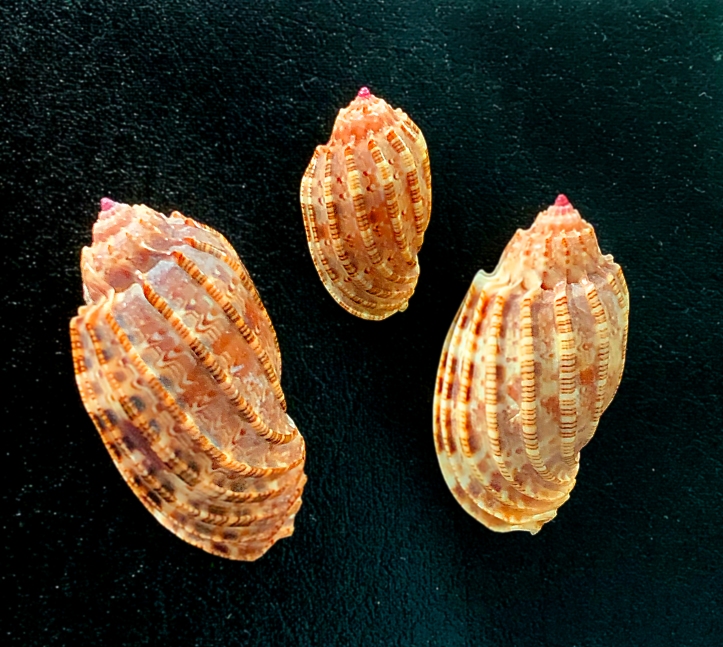 The Harp shells are among the nicest sculpted with the most intricate pattern of all gastropods.  Today there are a dozen recognized species, all of which are very similar.  All but one species are very affordable, making the Harps a favorite to collect. Placing the different specie on a table together is an excellent lesson in differentiation as they are very similar with only minor differences.
Harpa amouretta is the easiest to identify. It is the smallest harp, generally about 2”, and the only one that is elongate whereas all the others are globular. One element of its pattern, the two by two pairing of fine blackish lines that cross elevated ribs, is unique.
The common name is Lesser Harp. In times past it was know as Harpa minor, a name that is more fitting. It is extremely widespread in distribution across the entire Indo-Pacific region.  Harpa Amouretta lives either in sand or under rocks and in proximity to reefs. There is a little variation in color and the pattern is consistent.  Harpa amouretta does vary in weight, degree of elongation and thickness of lip.  Also there are populations where the ribs are glossy but the space between is dull.  Several subspecies have been named and generally rejected.
These three Philippine specimens are 1.5”, 2.25” and 2.5”. All are in gem condition and were donated from the collection of Richard Kent