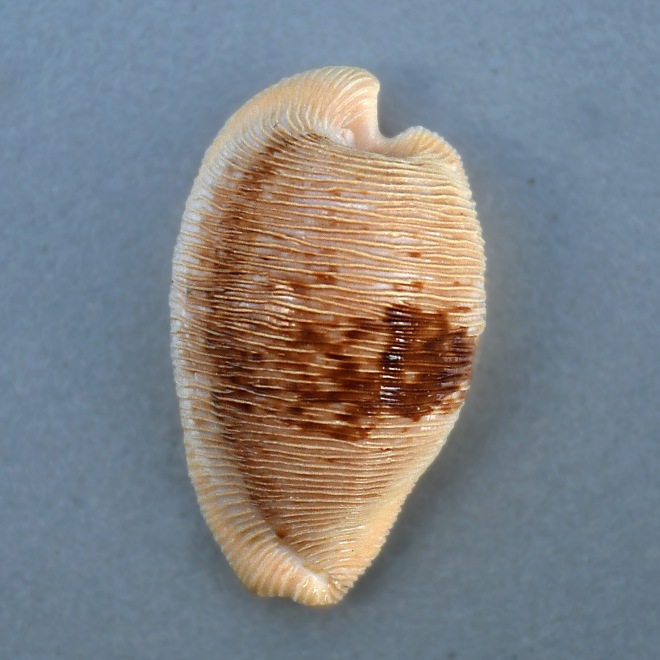 The Atlantic and Indian Oceans meet the icy Antarctic waters below the coast of South Africa. In the sheltered bays a rich unique marine fauna has developed with an array of indigenous cyrpraea including a couple of oddballs that make shell collecting such a fascinating hobby.

Cypraea capensis is one such shell. It’s like no other. From a distance it looks likes a typical cowry, but on closer inspection one sees fins that originate in the aperture and completely cross over the base and dorsum encircling the shell and meeting the teeth on the opposite end. The shell is a pale uniform mushroom color with an irregular brown blotch and has a discernible mantle line. The dorsum is glossy. There is little variation in color and pattern from shell to shell. Even the blotch is fairly consistent.

Capsnsis lives on rocks in both moderate and deep water with deep water specimens bringing vastly higher prices. There are a few named varieties.

Before the popularity of SCUBA, virtually all specimens were dead collected on the beach. As the diving season is rather short, few capensis come to the market each year, making it a difficult shell to obtain.

Our specimen is of good size, 30mm and should be considered gem. Similar shells bring about $40 on the market. It was originally purchased in a small dealer’s lot from a South African diver/collector and is from the collection of Richard Kent. This is an intriguing shell to look at; one can spend much time studying its appearance.