Donkey’s Ear Abalone – Set of 5
Haliotis Asinina Linn 1758, taken in coral reef at 10-15m, Biri Island, N Samar, Philippines
Halitotis, commonly known as abalone, ear shells, or ormers, occupy a rather unique place in the world of gastropods. They are immediately recognizable, even to non collectors by their flattened saucer like shape, a body whorl almost as large as the shell itself, and the beautiful, nacerous (mother of pearl) interior. The giant abalone from California and Australia are popular edibles, so popular in fact that stocks have diminished to the point where survival of various specie is threatened. Abalone are herbivorous, generally live among rocks where they attach themselves using their large foot, the edible muscle. The mother of pearl interior is used for jewelry, buttons and other decoration. The giant abalone shells have traditionally been polished and used as souvenir ashtrays.
There is one genus, Haliotis, in the family Haliotidae. There are about 100 species that live in temperate or tropical waters. Haliotis asinina Linn 1758, is one of a very few that inhabit Philippine waters. This growth series is representative, however asinina does grow much larger. Note the interesting olive green coloration of the larger specimens which is very rare in marine shells. These are fresh specimens collected late in 2013 by Philippine locals. Donated by Richard Kent. 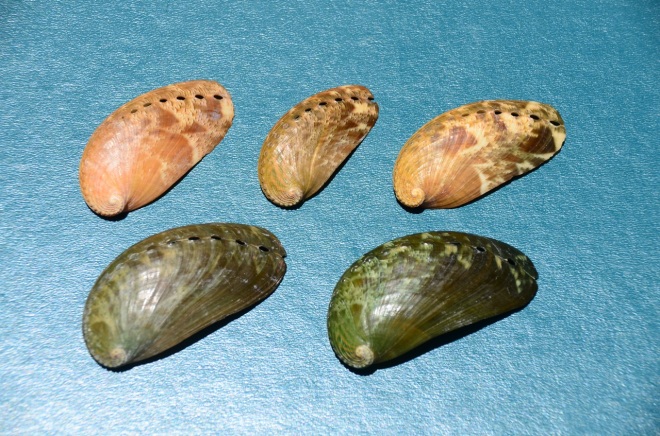