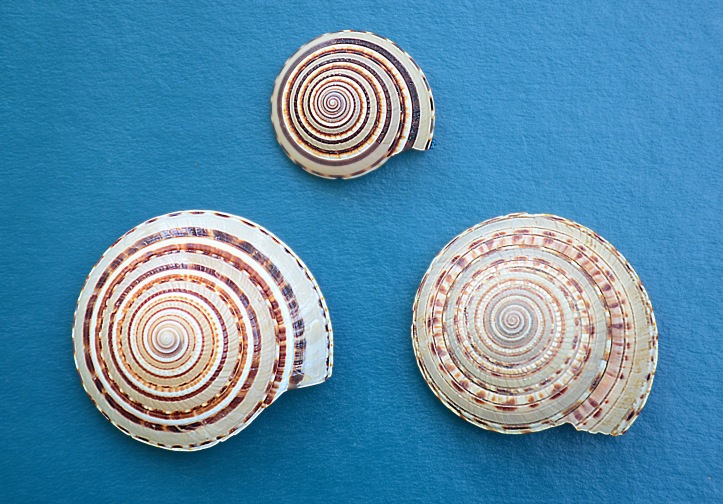 It’s a wonder of nature how a simple snail can create such a masterpiece of a house for itself. The spirals of the Sundial shells, family Architechonicidae, are always perfect. Architechonicidae is a small family with members in topical seas around the world. There are only three, possibly four species that attain a size of over 2 inches, however there are numerous species that are quite small and rarely collected.
The Sundials are all very similar in appearance. It is not easy to tell them apart. Architectonica perspectiva (Linnaeus, 1758) is the most common Indo-Pacific Sundial. Adult specimens are normally about an inch and a half. Smaller ones were often collected and sold in bulk for the craft market, but nowadays these are not so easy to come by. We have two specimens, the smaller is typical and the two and a quarter inch one a prize catch from Thailand.
Architectonica maxima (Philippi, 1849) is the largest of the Sundials growing to a maximum of three inches. Occasionally one that big is collected in Viet-Nam. This specimen is about as big as one is likely to encounter.
The most obvious differences in the two specie is, one: A solid line in perspectiva that encircles the shell as opposed to to the mottled line in maxima, though as the shell grows in size the line will break up and, two: The more intense colors of perspectiva. There are other differences such as the spacing of groves, nodulues, and color pattern. Examine closely with a magnifying glass and one will see they are quite different.
In the Caribbean we have the Common Sundial, Architectonica nobilis (Roding, 1789,) which is anything but common recently. It also will grow to over two inches. Additionaly as in the Pacific there are numerous small species.
Donated from the collection of Richard Kent