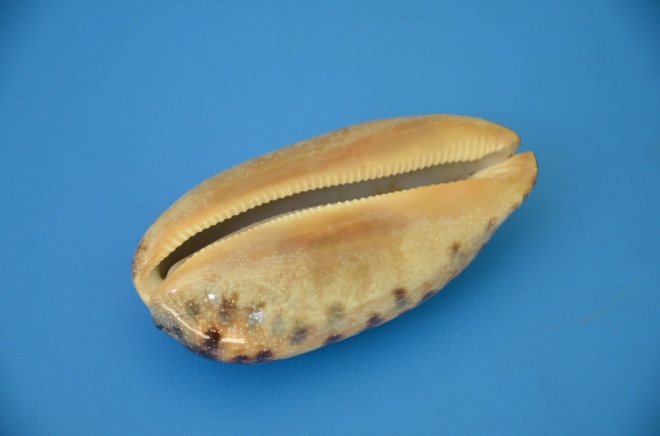 Cypraea testudinaria, Linne 1758 – the Tortoise Cowrie.  It’s amazing how many shells Linnaeus classified, even more amazing that so many names remain valid today.  Cypraea testudinaria is instantly recognizable. It is impossible to confuse with any other cypraea. Its shape, sizing and coloring is distinct. It is a heavy massive shell that grows up to 5″ in length. Cypraea testudinaria is cylindrical in shape, brownish in color, big irregular spots around the margins and a pattern of dark brown blotches that extend across the dorsum. It also has white flecks imbedded in the nacre making it look as if covered with dandruff. The white flecks seem to be a mystery, there doesn’t appear to be a published explanation. Outside of size, there is little variation, the pattern is rather consistent from one specimen to the next though some have larger dark area than others. The base seems to have more variation than the dorsum, ranging from light grey to almost pink to tan through shades of brown. Cypraea testudinaria is widespread across the tropical Indo-Pacific, however it is relatively uncommon. Like most cypraea it is a reef dweller. Our specimen was found exposed at night on reef rubble off Samar Island, Philippines in 2006. It is darker than average in color, fully mature and over 4″ in size. Donated by Richard Kent